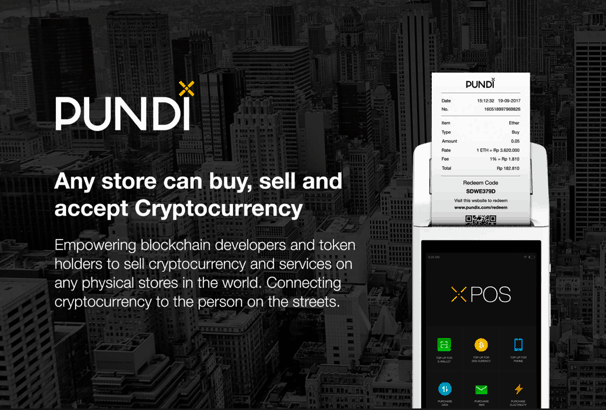 Pundi X, a Blockchain startup that aims to make cryptocurrencies an enabler of ubiquitous cashless payment environments across South East Asia, has unveiled the Pundi X POS (Point of Sale) smart device to enable shops, cafes and convenience stores to sell cryptocurrency to a broad cross section of general consumers who would otherwise have little or no access to cryptocurrency.

Pundi X builds on the existing Pundi-Pundi business model of cashless payment systems launched early 2017, which uses smart phones to scan QR codes and make instant payments in retail and restaurant outlets, and which has already signed up more than 100,000 registered users and over 500 merchant partners in Jakarta.

“We’ve demonstrated the demand for cashless transactions with our Pundi-Pundi QR app which is now established as one of the biggest in Indonesia, following the Alipay model,” said Zac Cheah, CEO of Pundi X. “Now we are well placed to build on our extensive user base and relationships with leading partners to take cashless transactions to the next level by bringing cryptocurrencies to the average consumer.”

“Less than 1% of the global population owns cryptocurrency despite its tremendous potential because the purchasing process is far too convoluted for the man or woman in the street,” added Cheah. “Now the mission for Pundi X is to make buying cryptocurrency as easy as buying a bottle of water – by providing universal access, anytime, anywhere.”

Unlike markets such as China where Alipay and WeChat Pay set the standard, cashless payments in Indonesia have been slow to take off – in part, because of a low level of just 23% bank account ownership and limited mobile digital payment penetration in a market where consumer purchases are still largely cash-based and offline.

Pundi X will fuel its growth with money raised through the issuance of native Blockchain tokens in an ICO (Initial Coin Offering) that stands out from other candidates in a crowded marketplace because it already has a track record of successfully building the Pundi-Pundi cashless mobile payment business in just twelve months in a previously under-serviced high volume, mass market sector.

The success of the company’s business is based on partnerships with leading retailers and restaurant chains including NU Cash, the fintech payment app belonging to one of the world’s largest religious organizations with a membership of 100 million, and Bulog Pay, a cooperative with 25,000 local convenience stores across Indonesia.
Pundi X plans to launch services with both NU Cash and Bulog Pay in Q1 2018 that will enable Pundi X to connect with this extensive community.

Project implementation will be handled through a partnership with E2Pay, a fintech services provider with close to 20 years’ experience in payments processing, that provides access to payment gateway technology, as well as to financial institutions and large communities of potential new users.

Pundi X has reached an agreement with E2Pay (PT E2Pay Global Utama) earlier this week to integrate Pundi X Tokens (PXS) into traditional financial institutions and to make it available to the mass population of Indonesia. PXS is the ‘gas’ that will fuel the upcoming ICO and enable participating shops, cafes and convenience stores to sell cash-free both cryptocurrency and goods.

Pundi X is aiming to be present in 100,000 stores in cities across Indonesia, the rest of South East Asia and around the world, giving over 100 million users access to buy cryptocurrency at their nearest shops, cafes, or convenience stores.