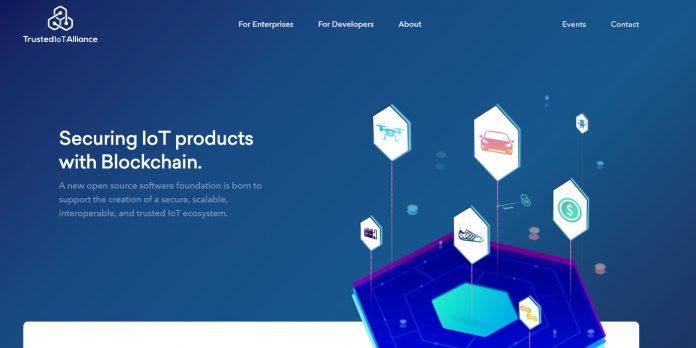 “The exponential growth of IoT and the ubiquity of connected devices brings unparalleled value to data, fully transforming the service sector, the supply chain and in turn the modern economy. Yet the rapid nature of that technological evolution has come at the cost of our security and freedom, a cost that has not gone unnoticed by industry leaders.”

“Connecting with some of the best minds in the industry helps us set the standard of robust, secure, and persistent data sharing that we so unquestionably deserve. The Trusted IoT Alliance is positioned to accelerate the emergence and widespread adoption of IoT enabled Blockchain platforms.” Pihkala added.

After founding members of the Alliance began informally cooperating as far back as December 2016, the Trusted IoT Alliance was formally launched in September 2017. The consortium aims to leverage the Blockchain and other security technologies to introduce trust into IoT and ultimately roll out practical use cases that deliver real business value and harness the disruptive power of Blockchain technologies.

Zaki Manian, the Executive Director of Trusted IoT Alliance, said: “Data Marketplaces are one of many critical applications that are emerging at the intersection of IoT and Blockchain. It was clear from the beginning of our discussions with the Streamr team that their cutting-edge platform aligns perfectly with our vision not only for the future of the Alliance, but for the industry as a whole. We look forward to active collaboration between enterprise members and great teams such as Streamr.”

The formal goal of the consortium is to enable a decentralized trust model for interoperable digitized identities of physical goods, documents, immobilized assets, sensors, and machines and to scale that model to billions of connected devices. In addition to global leaders in traditional fields, founding members of the Alliance include leading Blockchain companies Consensys, BitSE, Chronicled, Qtum, BigchainDB, Ledger, slock.it, Skuchain, and IOTA.

“This is an incredible honor and the latest in a series of exciting developments for our project. To see such early success and recognition for our platform is inspiring and further stresses our crucially important mission to create a system to transport IoT data in a decentralized, resilient, and scalable manner.” concluded Pihkala.

Following their successful precontribution period, which saw Streamr reach it’s 5 million CHF hard cap in 25 minutes, registration for the Streamr crowd contribution period commenced on Friday, October 6, 2017, at 12 noon UTC with DATA tokens available at a rate of 1 CHF = 18.25 DATA. The overall cap for all contributions is 30 million CHF.

Facebook
Twitter
Pinterest
WhatsApp
Previous articleExscudo and Crypto.Tickets exclusive partnership opens a new market for cryptocurrency
Next articleRevolutionary Ico Aimed At Tackling Waste Surplus And Energy Shortfall Announced
Richard Kasteleinhttps://www.the-blockchain.com
In his 20s, he sailed around the world on small yachts and wrote a series of travel articles called, 'The Hitchhiker's Guide to the Seas' travelling by hitching rides on yachts (1989) in major travel and yachting publications. He currently lives in Groningen, the Netherlands where he has set down his anchor to raise a family and write. Founder and publisher of industry publication Blockchain News (EST 2015) and director of education company Blockchain Partners (Oracle Partner) – Vancouver native Richard Kastelein is an award-winning publisher, innovation executive and entrepreneur. He has written over 2500 articles on Blockchain technology and startups at Blockchain News and has also published in Harvard Business Review, Venturebeat, Wired, The Guardian and a number of other publications. Kastelein has an Honorary Ph.D. and is Chair Professor of Blockchain at China's first blockchain University in Nanchang at the Jiangxi Ahead Institute software and Technology. He has over a half a decade experience judging and rewarding some 1000+ innovation projects as an EU expert for the European Commission's SME Instrument programme as a startup assessor and as a startup judge for the UK government's Innovate UK division. Kastelein has spoken (keynotes & panels) on Blockchain technology at over 50 events in 30+ cities.