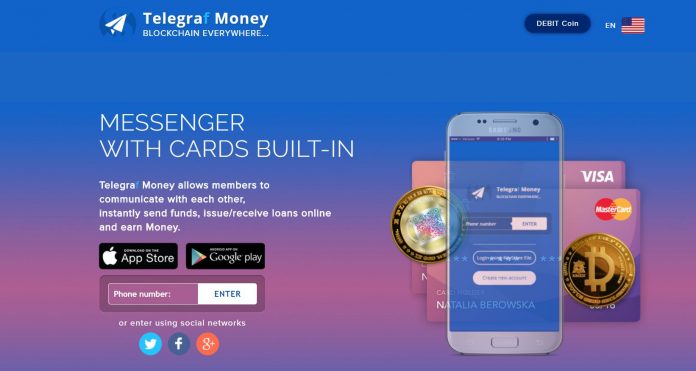 At the World Blockchain Summit, held in Dubai 24-25th of October, Telegraf.Money messenger and DEBIT Coin (DBC) crypto-currency, CEO and Co-founder of this project, Kent Kristensen,  made a speech announding the Telegraf ICO is the first ICO in the world held in a form of an interactive auction.

At the moment almost 800 participants have already participated in this ICO, they submitted their orders for more than 2.4 million USD. The sales statistics are tracked in real time on the DebitCoin.io website.

The goal of the Auction is to get the best prices and conditions for every player involved.
The major difference between this method of distribution of tokens from others is that the prices for tokens are set by the participants themselves in the bidding process, by issuing limited bids for the purchase.

After accepting bids, the minimum cut-off price is determined, according to which all successful bids receive tokens at the lowest prices. Bidders can also apply for a purchase at the weighted average price of the auction.

Pre-payment of orders during the auction is not required, it is enough to have the necessary funds in your wallet BTC / ETH. After accepting applications, participants are given 24 hours to pay for tokens, in addition, there is an opportunity to refuse paying during this period, having weighed all the pros and cons.

Under the terms of the Auction, if a participant has applied at a price higher than the minimum set, he will receive proportionally more DebitCoins (DBC) than in the bid, since the calculation is based on the minimum cut-off price.

All the participants that bought tokens within the first 30 days from the start of ICO have the opportunity to convert their tokens purchased at the Auction after 90 days with a coefficient of 1.1 in dollar equivalent, by withdrawing funds to one of the attached VISA / Mastercard cards.

Facebook
Twitter
Pinterest
WhatsApp
Previous articleCashaa Partners with Airbitz for Secure and Speedy Global Payments
Next articleAmmbr and Verif-y Cut Deal to Bring Self-Sovereign Digital Identity to Emerging Markets
Richard Kasteleinhttps://www.the-blockchain.com
In his 20s, he sailed around the world on small yachts and wrote a series of travel articles called, 'The Hitchhiker's Guide to the Seas' travelling by hitching rides on yachts (1989) in major travel and yachting publications. He currently lives in Groningen, the Netherlands where he has set down his anchor to raise a family and write. Founder and publisher of industry publication Blockchain News (EST 2015) and director of education company Blockchain Partners (Oracle Partner) – Vancouver native Richard Kastelein is an award-winning publisher, innovation executive and entrepreneur. He has written over 2500 articles on Blockchain technology and startups at Blockchain News and has also published in Harvard Business Review, Venturebeat, Wired, The Guardian and a number of other publications. Kastelein has an Honorary Ph.D. and is Chair Professor of Blockchain at China's first blockchain University in Nanchang at the Jiangxi Ahead Institute software and Technology. He has over a half a decade experience judging and rewarding some 1000+ innovation projects as an EU expert for the European Commission's SME Instrument programme as a startup assessor and as a startup judge for the UK government's Innovate UK division. Kastelein has spoken (keynotes & panels) on Blockchain technology at over 50 events in 30+ cities.