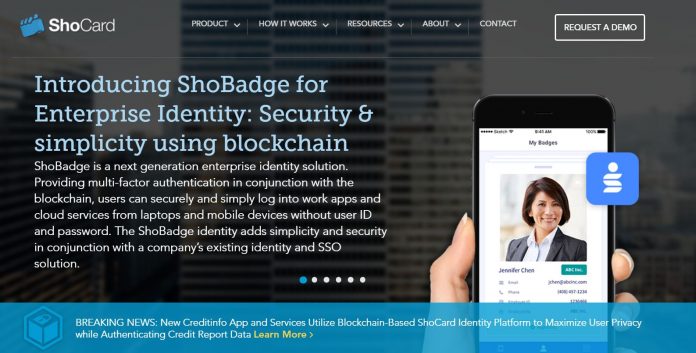 ShoCard, a leading Blockchain-based identity management system (IMS), announces tech industry leader Bob Tinker has joined the board of ShoCard. Tinker was the founding CEO of MobileIron (NASDAQ:MOBL), the leading publicly traded provider of mobile security for apps, content and devices. In addition to his role as a board member, Tinker is an investor in the company.

Following ShoCard’s recent announcement of its successful funding round and its new enterprise IMS, ShoBadge, Tinker’s enterprise software leadership experience will be an invaluable addition to the ShoCard Board. Over eight years, Tinker led MobileIron from initial idea to market-leading product with over 12,000 enterprise customers and more than $160 million in revenue.  He also raised over $150 million of private capital and $100 million of public capital through a successful IPO in 2014.

“Bob has rare experience – leading an enterprise security company from an idea to a leading, publicly-traded company,” said Armin Ebrahimi, CEO and founder at ShoCard. “We are thrilled to have Bob’s product and go-to-market expertise to help our enterprise product, ShoBadge, transform the identity experience and support ShoCard’s journey to become the user-centric identity platform of the future.”

Tinker joins ShoCard at a pivotal time in the company’s growth. After debuting the company’s Digital Identity Card for consumer-facing companies in 2015, ShoCard quickly developed applications of the solution across financial institutions, airlines, health providers, call centers and more. Now, with the creation of ShoBadge, the company is positioned to be the preeminent provider of user-centric identity and multi-factor authentication, powered by the Blockchain, that transcends enterprise boundaries and enables Bring Your Own ID (BYOID) in the workplace.

“ShoCard’s technology, combined with the Blockchain, has created a compelling product that extends secure multi-factor authentication across company boundaries while also simplifying user experience for the end users,” said Tinker.  “ShoCard’s approach delivers immediate value for companies and employees. I’m particularly excited to be part of a company that will revolutionize enterprise identity to deliver on the promise of a BYOID world.”

For more information on ShoBadge and to request a demo, visit www.shocard.com/shobadge/.