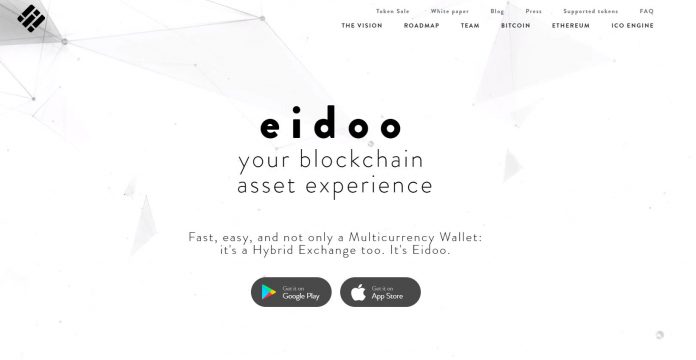 Eidoo has surpassed 100,000 downloads of its app that offers consumers a simple, easy-to-use multi-currency wallet and hybrid exchange for their cryptocurrencies. The key milestone comes as the total cryptocurrency market capitalization reaches $208 Billion and the CME prepares to launch a bitcoin futures market, propelling the sector ever closer into the mainstream. (www.eidoo.com)

The innovative Eidoo app leverages the full potential of digital currencies in one consumer-friendly environment enabling those who were once deterred from cryptocurrencies through lack of technical knowhow  to embrace the dawn of a new financial system.

Following a successful ICO that raised $27.9M, Eidoo is also accelerating its development road map to integrate a hybrid exchange, a Bitcoin wallet, an Eidoo-branded debit card, and a raft of innovative add-on services that will enable customers the convenience of having a single mobile app where they can buy, sell, convert and spend digital currencies with ease.

Built on top of the Ethereum Blockchain, EDO is an ERC20 token necessary for users to pay fees for the services offered in the Eidoo app. As a multi-currency wallet, Eidoo supports both Ethereum and all ERC20 tokens automatically, so there is no need for users  to set up a new wallet every time.

The net revenue from all the value-added services linked to the Eidoo app will be collected in EDO tokens by a publicly auditable smart contract that will divide revenues as follows:

“We’re thrilled by the enthusiasm our app has received and are working hard to roll out a full suite of add-on services to make the purchasing, selling, converting and spending of cryptocurrency fast and easy for the masses. Hitting 100,000 downloads just weeks after our ICO was a significant indicator for the company that we’re building a blockchain service that people desperately need.”