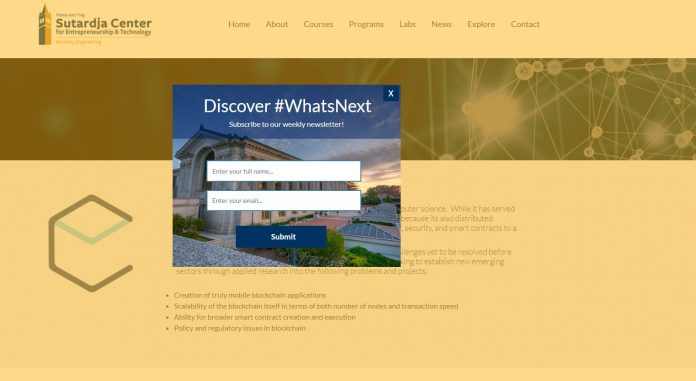 Steve Chen, founder of EchoLink, a credentials-verification Blockchain project, has been appointed industry co-lead of the new Berkeley Blockchain Lab, a platform for students to gain real-world experience working with Blockchain technology. Chen came up with the idea behind EchoLink while serving as the founding engineering director at a NYSE mobile technology company, where he saw the opportunity to create efficiency and value by storing data around engineering graduates’ degrees on the Blockchain. As he embarks on helping to lead the Berkeley Blockchain Lab, Chen will draw upon his experience in both enterprise technology and entrepreneurship.

The Berkeley Blockchain Lab is run by the Sutardja Center for Entrepreneurship & Technology (SCET), and will give Berkeley students one unit for participating in the EchoLink project through The Berkeley Blockchain Lab toward the five required to earn a Certificate in Entrepreneurship & Technology. The SCET has helped create the foundation of Berkeley’s entrepreneurship ecosystem by launching institutions and programs such as SkyDeck, the Fung Institute for Engineering Leadership, the Engineering Leadership Professional Program, Global Venture Lab, and cultivating an extensive network of Silicon Valley and global partners.

The focus of the first Berkeley Blockchain Lab project will be on off-chain data inputs, distributed storage, and web-based Blockchain query systems. App development will be evaluated with the objective of minimizing the cost of running decentralized applications (Dapp). A secondary objective will be developing a Dapp that can process data in batches. The application focus will be bringing trust-based credentials from off chain including degree certificates onto various Blockchains

EchoLink in partnership with the Berkeley Blockchain Lab has ambitious goals. EchoLink seeks to create its own utility token, the EchoLink token (EKO), which will be an exchange medium within the EchoLink system to pay fees between users and other participants in the system. The data providers (schools and individual students) from public Blockchains, alliance Blockchains, and even private Blockchains will be easily rewarded with EchoLink tokens and the EchoLink token will be used to establish an international education reputation and skill level marketplace.

With the EchoLink token as a common method of value exchange in the system, EchoLink seeks to provide a common measure of the quality of education in different countries, institutions, and disciplines that can be measured in a consistent way.

To get involved in the Berkeley Blockchain Lab or to get involved as an educational institution seeking to pilot the EchoLink technology, please reach out to Steven Chen at steve@echolink.tech.

UC Berkeley’s initial 2-credit “DeCal” Blockchain course was supported by the Blockchain at Berkeley student organization which has 567 members in its closed Facebook group and also has Meetup and Slack channels that are extremely active. Collin Chin, UC Berkeley ’19 a current electrical engineering and computer sciences junior, was able to secure an internship at leading Blockchain startup Consensys as a software engineering intern the summer of 2017 after getting his first taste of developing use cases for Blockchain as a developer at Blockchain at Berkeley in the Fall of 2016.

Collin now serves on the Executive Board at Blockchain at Berkeley and handles recruiting of members and execution of events. Max Fang, President at Blockchain at Berkeley, also involved with the DeCal course, also spent his previous summer as a Developer Advocate Intern at Lightning Labs in SF and is a double major in computer science and economics.

UC Berkeley has been experimenting with programming around Blockchain for the past few years, with one of its initial tests around demand for Blockchain related programming coming through the Blockchain Technology Collider in March 2016 which was launched to give undergraduate and graduate students the opportunity to explore emerging opportunities at the intersection of finance, security and cryptography and have a chance to win $5,000. The event brought together those in engineering, finance, economics, mathematics, across the Berkeley campus. With the success of the Collider, Berkeley set out to launch a new venture called the Berkeley Blockchain Lab, and Chen at the EchoLink project was appointed the industry co-lead. The Berkeley Blockchain Lab will allow students to work on real-world Blockchain applications using EchoLink’s open source API.

UC Berkeley is an ideal first pilot educational institution because of its active student Blockchain enthusiast community. The student leaders of Blockchain at Berkeley come from diverse professional experiences including serving as analysts of investment banks and software engineers at local tech startups.

There are more than twenty Nobel Memorial Prize Laureates in Economics affiliated with UC Berkeley. With Berkeley’s reputation for strong economics and computer science programs, combined with its culture of student activism forged in the 1960s, the school is well-positioned culturally to take advantage of the focus on decentralization and the elimination of “middlemen” and central authorities that Blockchain startups often promote. Berkeley’s ability to work interdepartmentally and pursue Blockchain from the economics and technical angles proves to be its main competitive advantage.

Facebook
Twitter
Pinterest
WhatsApp
Previous articlePeter Vessenes Announces Deluge Network To Support a Safe and Direct Way to Contribute Bitcoin Directly to ICOs
Next articleICO Deep Dive: Probing Utility vs. Security Clues from the SEC
Richard Kasteleinhttps://www.the-blockchain.com
In his 20s, he sailed around the world on small yachts and wrote a series of travel articles called, 'The Hitchhiker's Guide to the Seas' travelling by hitching rides on yachts (1989) in major travel and yachting publications. He currently lives in Groningen, the Netherlands where he has set down his anchor to raise a family and write. Founder and publisher of industry publication Blockchain News (EST 2015) and director of education company Blockchain Partners (Oracle Partner) – Vancouver native Richard Kastelein is an award-winning publisher, innovation executive and entrepreneur. He has written over 2500 articles on Blockchain technology and startups at Blockchain News and has also published in Harvard Business Review, Venturebeat, Wired, The Guardian and a number of other publications. Kastelein has an Honorary Ph.D. and is Chair Professor of Blockchain at China's first blockchain University in Nanchang at the Jiangxi Ahead Institute software and Technology. He has over a half a decade experience judging and rewarding some 1000+ innovation projects as an EU expert for the European Commission's SME Instrument programme as a startup assessor and as a startup judge for the UK government's Innovate UK division. Kastelein has spoken (keynotes & panels) on Blockchain technology at over 50 events in 30+ cities.