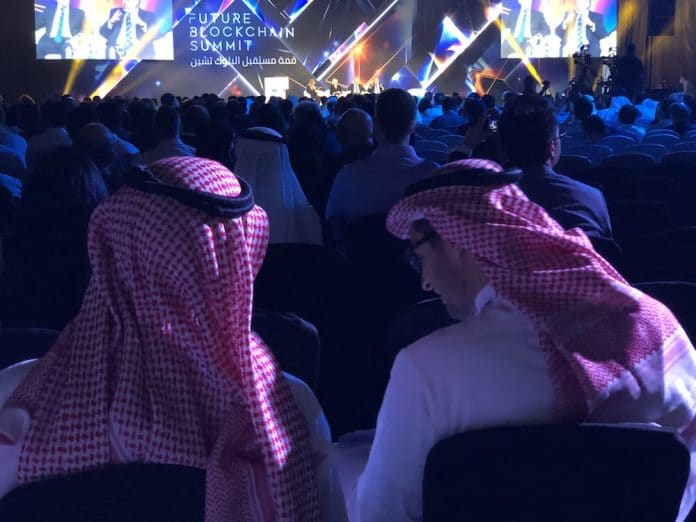 Dubai’s Blockchain Strategy has a lofty goal: to execute all applicable government transactions using blockchain by 2020. And increasing the happiness quota of Dubai’s citizens is the ultimate objective of this focus on governmental efficiency, and advancing legislation and global entrepreneurship. To hurry this along, a new registry for foreign business was announced in the lead up to the city’s inaugural Future Blockchain Summit which took place last week.

Boasting the worlds’ tallest building and its biggest mall, this city rising from the desert sands has a can-do culture. With aspirations to be the model metropolis of the future, Dubai wants a quarter of its fully driverless road transport to use artificial intelligence by 2030; rooftop solar power will also be mandatory in the UAE, aiding Dubai’s goal of generating 75 percent of its energy with solar power by 2050; flying taxis and robocops are also on the agenda.

Underpinning many of these innovations is the blockchain. By 2020, the emirate wants all visa applications, bill payments and license renewals — which account for over 100 million documents each year — to be transacted digitally using blockchain.

The Dubai Blockchain Strategy was launched in 2016 by His Highness Sheikh Hamdan bin Mohammed bin Rashid Al Maktoum, Crown Prince of Dubai and Chairman of the Executive Council of Dubai. According to Smart Dubai, which is conducting government and private organization workshops to identify services that can be best enhanced by blockchain adoption, the strategy could save 25.1 million man hours, leading to USD 1.5 billion in savings per year for the emirate. Much of this enhanced productivity will stem from moving to paperless government.

To expedite these developments, Smart Dubai, in collaboration with IBM, the city’s Department of Economic Development (DED) and the Dubai Silicon Oasis Authority (DSOA), has unveiled a joint blockchain project to improve ease of doing business in Dubai and facilitate direct foreign investment.

Dubbed the Dubai Blockchain Business Registry Project, the scheme will streamline the process of setting up and operating a business, rolling out digital exchange of trade licenses and documentation for all business activities, while ensuring regulatory compliance across the city’s business ecosystem.

The DSOA, the regulatory body for the free zone technology park, Dubai Silicon Oasis (DSO), will be the first to implement the pilot project.

“With the Blockchain Corporate Registry, investment, as well as doing business in Dubai, will become a seamless and smart experience,” stated Sami Al Qamzi, Director General of the DED, adding that, “DED always seeks to integrate the latest technologies for added competitiveness and customer happiness across services in Dubai.”

Housed in Dubai’s World Trade Centre, the Future Blockchain Summit, taking place on May 2-3, 2018, boasted more than 6,000 attendees and 800 government delegations. It was opened by the director general of Smart Dubai, Dr Aisha bin Bishr. But not before a showstopping delay. Official delegations were held up in the heaving entrance hall for over an hour and a half. Perhaps a blockchain-enabled security system should be a priority for future events.

Bin Bishr’s keynote served to highlight how the government agency has prioritised blockchain-based technology as the foundation of the emirate’s digital infrastructure.

“The Dubai Blockchain Strategy rests on three main pillars,” she informed delegates. “The first pillar is for 100 percent of our government’s services to be delivered via Blockchain. The second pillar is to provide and enable an ecosystem that can empower startups. The final pillar is to position Dubai as a global thought leader in Blockchain. It’s important to stress that we don’t view technology development as [an] end, but the means to spread happiness.”

Announcing the initiative’s latest venture, she added: “The launch of the Commercial Registry Project is testament to our drive towards making Dubai run on Blockchain by 2020. We are working on over 20 more use cases with several entities across the city, and hope to launch these later this year.”

Many of these efforts were showcased at the Summit, geared towards fast-tracking Dubai’s journey to becoming one of the smartest cities in the world.

As Managing Editor of Blockchain News, I was invited to chair its energy and real estate tracks and to moderate the keynote panel, ‘Tapping Into Blockchain Investor Pools.’

Aiming to radically transform how people, buy, sell and lease real estate, the Dubai Land Department, the government agency tasked with overseeing property purchases and trades, launched a blockchain-powered system back in October. Its objectives are to secure financial transactions, electronically record all real estate contracts, and connect homeowners and tenants to property-related commodities, such as electrical, water and telecommunications utilities.

The emirate’s property sector is projected to ramp up in 2018. The combination of blockchain-adoption, eye-popping mega projects and a growing demand for new apartments, ahead of Expo 2020, are seen as key.

Dubai is also turning to blockchain as a solution to domestic challenges, wedding new technologies to the state bureaucracy and positioning the emirate as a Petri dish for experimentation, not just sun-and-shopping tourism.

An expedited registry for business projects is part of this aim, better enabling projects such as the Dubai Future Accelerators programme, launched in 2016. Given access to millions of dollars of venture capital, the program invited 30 companies to test their technologies with local government authorities. The participants include supersonic transportation system Hyperloop and ConsenSys, a company building developer tools and applications for blockchain. Many of these projects are now reaching fruition.

Dubai’s authorities hope that such collaborations will help solve the challenges facing government departments, including cutting congestion by 20 percent with automated transport networks, buildings which reduce power usage by two-thirds and behavioral, genetic and biological systems to better identify and track criminals.

But Dubai’s blockchain strategy and its wider futuristic ambitions are threatened by a lack of technical skills and infrastructure to support them, so attracting foreign nationals is key. The new ‘Dubai Blockchain Business Registry’ seeks to remedy this, helping businesses and entrepreneurs to settle in the country by reducing red tape and making it easier for investors to gain approval to start a business in the city.

Tech giants IBM, Microsoft, SAP and Cisco have already set up shop and are part of the city’s Global Blockchain Council, a body of 32 government entities and private global companies launched in 2016.

But Dubai is also cherry picking the elements of blockchain it wants to adopt, distancing itself from Bitcoin and the unsavoury image of scam ICOs. There are signs of regulation afoot. Chairman and Managing Director of Realm Investments and Future Blockchain keynote panellist, Sultan Ali Lootah told me: “We want to invest in coins that are regulated, and governments are moving towards this.”

The forward-thrusting, international atmosphere in this city is unmistakable, as is its determination to embrace the future and shake off its reliance on oil. With this in mind, Dubai’s ambitions don’t stop at being the world’s first city of blockchain. The ultimate aim, says Smart Dubai, is to sell its blockchain manual to other smart cities. A comprehensive guide is planned, laying out how, specifically, a city can convert every sector to work on top of blockchain: the types of stakeholders needed, the technology, and the different layers of data sets required.

As a guidebook to the future, this may yet prove the emirate’s most valuable cryptocurrency yet. After all, as Future Blockchain Summit panellist and EOS co-founder Brock Pierce put it: “Blockchain is the next internet”.