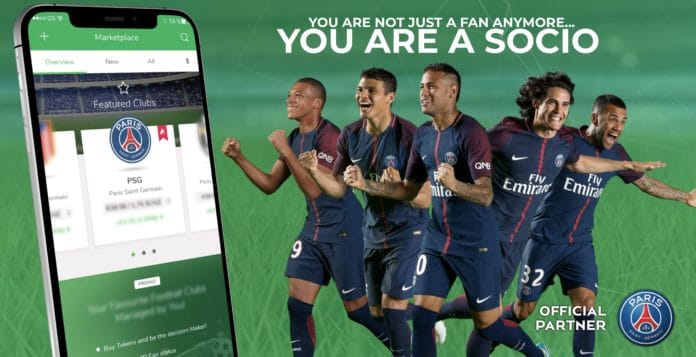 Paris Saint-Germain has announced a strategic partnership with blockchain platform Socios.com – an alliance that is planned to last for several years.

Socios.com will start working alongside the Club to develop Paris Saint-Germain’s blockchain strategy as “Official Branded Cryptocurrency Partner”, by leveraging the technology to enhance and evolve its fan engagement.

The Paris Saint-Germain fan token will be listed on the Socios.com platform and will allow fans to engage with the Club through mobile voting and polling platforms. Token owners will also be granted access to exclusive fan rewards, content and experiences.

The partnership forms part of the club’s broader strategy to integrate blockchain technology, to enhance its relationship with fans and business operations.

Through Socios.com, transactions will be fully digital, secure, transparent and entirely connected to the real fan experience.

Marc Armstrong, Chief Partnership Officer of Paris Saint-Germain said, “Always at the forefront of digital innovation, Paris Saint-Germain is determined to leverage the opportunities that cryptocurrency can provide. This revolutionary technology will have an important impact on the Club’s overall business strategy and the way we engage with our fanbase. We are very pleased to welcome Socios.com in the Paris Saint-Germain family.”

Alexandre Dreyfus, Founder & CEO of Socios.com, said: “We are delighted and very proud to have signed Paris Saint-Germain as our first club to work on the evolution of its fan engagement strategy through the Socios.com blockchain platform. As well as being a leader on the football pitch, Paris Saint-Germain is also a digital pioneer and this demonstrates its leadership in innovation. We admire the Club’s vision in being the first club in world football to adopt this new technology and set a new standard in fan engagement.” Socios.com will create a new connection between Paris Saint-Germain and its global fanbase, helping the club to integrate blockchain technology as part of its fan engagement strategy.”