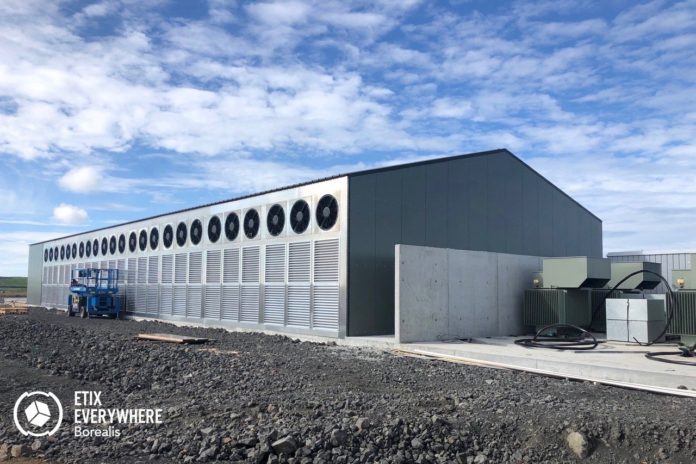 A new division of Etix Group, Etix Blockchain, announced it has opened two new Blockchain facilities in Iceland. The buildings are located near Iceland’s capital city Reykjavik (only 10 minutes away from the international airport of Keflavík). The other building is situated in Blönduós (located in the north of the country). In both locations the first facilities are already operational, and more buildup will be completed by the end of the year. As part of its global strategy Etix Group bought a majority stake in Borealis Data Center, an Icelandic company specialized in HPC and Blockchain services. The company will be renamed Etix Everywhere Borealis. Etix Blockchain, a new player in the Blockchain industry.

Following the evolution of the IT industry, Etix Group decided to launch “Etix Blockchain”, a division dedicated to provide colocation services for HPC and Blockchain applications and mining as a service capacity. As the banking and financial industry is becoming increasingly invested in the Blockchain field, they are looking for hosting infrastructures of higher standards, still offering a competitive price. Etix Blockchain benefits directly from the expertise developed by Etix Everywhere for the data center industry but also from the security products developed by Etix Labs.

To ensure a successful implementation in Iceland, Etix Group acquired 55% of Borealis Data Center, a pioneering company providing HPC and Blockchain services since 2014. With increasing data center footprint Iceland is becoming a strategic location for IT services. This partnership will expedite Etix Blockchain expansion plans.

Antoine Gaury has been appointed as Head of Etix Blockchain. He will leverage his market knowledge to expand the footprint of the company worldwide.

Etix Blockchain will benefit from Borealis’ knowledge of the Icelandic market and from their expertise of operating highly-efficient facilities since 2014.

“Iceland is a strategic location for HPC and Blockchain facilities thanks to its reliable and economical energy and its cool climate.” explained Björn Brynjúlfsson, CEO of Etix Everywhere Borealis. “According to international studies the country is among the safest data center locations on the planet and produces 100% renewable energy. These ideal conditions enable us to offer competitive solutions for HPC and Blockchain infrastructure.”

The current facility buildup is scheduled to be completed by end of year, at which time the two campuses combined will offer hosting capacity of about 30,000 servers.

Due to demand by international institutional customers that are making long-term strategic investments in HPC and Blockchain the two campuses are already sold out.