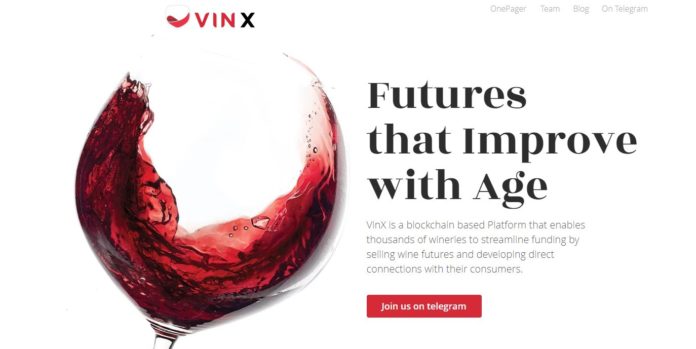 “Like any economy, the wine industry has difficulty scaling its middlemen-heavy systems in parallel with the growing demands of an increasing global market,” said Patrick M. Byrne, CEO and founder of Overstock.com. “VinX’s steps in tokenizing wine futures while allowing wine enthusiasts to know without a doubt that the bottles they purchase are filled with authentic wines will position the entire industry as a model of a new global economy that replaces old boys’ networks with frictionless trust through technology.”

“We are so excited to partner with the Overstock/Medici Ventures family to help us realize the VinX vision, which meshes exactly with the core values of Medici Ventures,” said Jacob Ner-David, VinX co-founder and CEO. “VinX is democratizing the capital structure of the wine industry by bringing consumers in direct contact with producers early in the wine-making cycle. We are riding the wave of direct-to-consumer, which Overstock has been a leader of for almost 20 years. In addition, because we are registering all wine futures as tokens on a blockchain, we are bringing a powerful validating force that will go a long way toward reducing fraud. VinX looks forward to benefiting from the many years of e-commerce experience of Overstock and the blockchain leadership of Medici Ventures and the rest of the Medici Ventures portfolio.”

VinX plans to create a token-based digital wine futures platform based on the Bordeaux futures model that allows for the selling and trading of wine futures on a transparent and secure blockchain to create an even playing field for transactions on a global scale. VinX’s platform aims to reduce fraud in the wine industry by using the secure and immutable aspects of blockchain to track provenance of wine to end consumer at a cost bearable to the industry.

Experts conservatively estimate that 20 percent of all wine in the world has counterfeit labeling, so what a consumer believes is a high-end bottle of wine could have a decidedly more local origin. It is often difficult for even the most seasoned collector to identify fakes. To combat this growing concern, VinX plans to use blockchain to connect wine lovers directly with wineries, eliminating fraudulent middlemen within the industry and providing customers with a direct line to the source of the products.

VinX is a blockchain based platform that enables wineries to streamline funding by selling wine futures and developing direct connections with their consumers. Founded and advised by a team that includes winery owners and  tech entrepreneurs, VinX is positioned to bring positive disruption to the $300+ Billion wine industry.