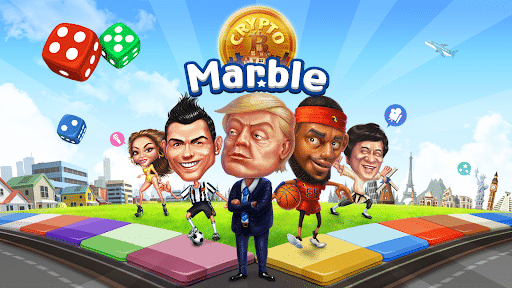 Crypto Marble will be the world’s first blockchain board game making use of crypto currencies. Users can employ celebrities from around the world as their staff and take advantage of their abilities. Crypto Marble is similar to monopoly, as the user can buy land in areas by throwing dice and moving horses.

The user can build various buildings (garage, office buildings, etc.) on the purchased land and can collect tolls when another user stops in the area. Users can monopolize their own buildings, take other people’s stakes and buildings, collect money, and eventually go bankrupt or win.

It’s possible to obtain various character cards through the random box, and users can also use character cards to grow and strengthen specific characters. In addition, there are dice and character-equipped items with their own abilities such as toll discounts and salary increases.

Crypto Marble is just about ready for launch. People can access the homepage and play it anytime and anywhere, regardless of device and OS, based on HTML5. The new game will be released in February.

The VX Network is currently running the IEO on Bitsonic, which allows people to use their purchased VX coin on any game in the blockchain game platform provided by the VX Network as well as the Crypto Marvel. By the first quarter of this year, games such as BitPet and full 3D blockchain golf game BitGolf will be available on the VX platform as well.