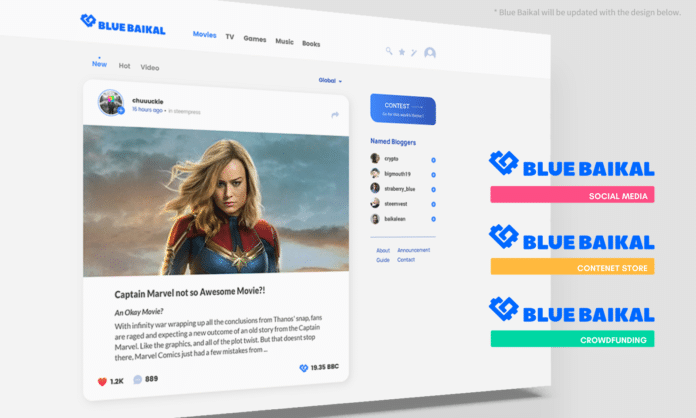 Blue Baikal, a community service for global users who enjoy entertainment, opened-up their pre-registration event, in which registrants can join the community, recommend a friend, and become ambassadors.

Blue Baikal is a Blockchain based entertainment content platform that connects content producers, influencers, and consumers. The company pursues a system in which entertainment businesses can grow, profits can be maximized, and fair profit sharing with the participants is promoted.

With three different formats, social media, digital content store and crowdfunding, Blue Baikal offers a platform in which users can promote, review or recommend their favorite movies, games, or other entertainment content.

Participating members can receive BBC Tokens as rewards. The earned Tokens can be used to purchase digital contents online or investments to content producers they wish to support.

The users of “Blue Baikal” also known as “Baikaleans,” are not just content consumers, the idea behind the concept is that they themselves can also become proactive influencers by supporting the global development of content producers and entertainment industry. “Blue Baikal” operators support “Baikaleans” to produce their own content and become influential.

“Blue Baikal aims to create a new trend with in the entertainment industry that is currently facilitated by large corporations with massive capital. Blockchain will be our fundamental technology in achieving our goal.”

During the pre-registration event, people can access Bluebaikal.io,  join, and instantly be rewarded with 100 BBC Tokens. Each invited friend joining the community will make them 50 bonus BBC Tokens as well. Additionally, Blue Baikal will be entering 100 BBC tokens for each registered user and the top 20 users who created the most invites will be gradually rewarded with those collected BBC Tokens.

In addition, “Blue Baikal” operators announced to open an Alpha version of “Blue Baikal.” It is available based on STEEM Blockchain basis Dapp and the users can access it at Bluebaikal.com, which requires a separate registration to STEEM.

The users of Bluebaikal.com can review or recommend the posts to receive extra STEEM coin rewards other than BBC Tokens.