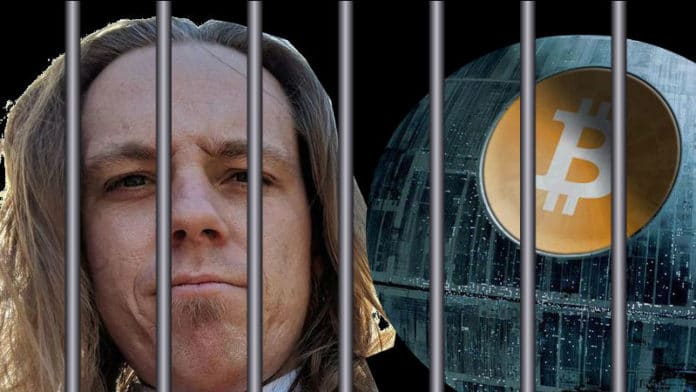 On October 21, 2018, Morgan Rockcoons tweeted at Donald Trump, after the president’s sweeping visit to Nevada before the midterms:

Seven days later Rockcoons was arrested by Homeland Security and charged with an elaborate crypto fraud under which prosecutors say Rockcoons made almost $100,000 selling land he didn’t own to crypto enthusiasts.

He’s been in jail ever since awaiting trial.

Rockcoons pleaded guilty on March 7, 2019, admitting that he operated a Bitcoin exchange without registering with the Financial Crimes Enforcement Network (FinCEN) of the U.S. Department of Treasury as well as admitting he devised a scheme to defraud individuals in connection with the purported sale of real estate in Elko County, Nevada, that he did not own.

More from the press release:

Prior to his 2018 arrest, Rockcoons was indicted on November 8, 2017 for operating the unlicensed money transmitting business.  He was arrested on that charge on February 9, 2018, and he was released on bond pending trial. In spring 2018, while on pretrial release, Rockcoons began promoting Bitcointopia on the internet and via social media.  A purported real estate development in the desert in Elko County, Nevada, Rockcoons touted Bitcointopia as a place where bitcoin is “legal tender.” On the website, Rockcoons offered parcels of land for sale for Bitcoin, claiming: “The land is currently owned by Bitcointopia, Inc. corporation.”  Rockcoons further stated, “500-1,000 Acre plots are for sale for 0.5 BTC per acre.” Victims who sent Rockcoons Bitcoin never received their title to land as promised.

To date, agents have identified at least 10 victims of Rockcoons’ fraud.