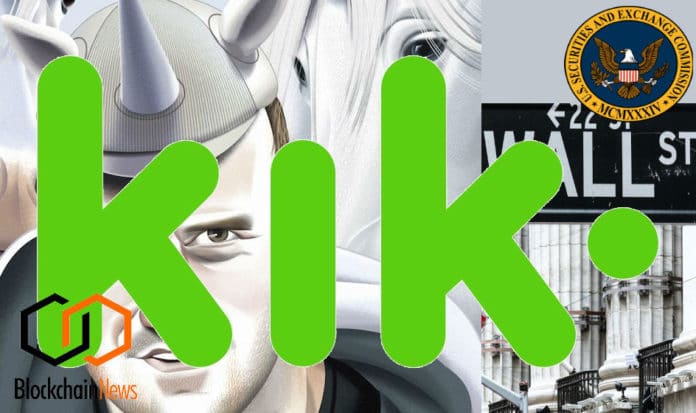 Canadian instant messaging company Kik Interactive filed its response in US District Court for the Southern District of New York to the SEC’s Complaint denying the alleged violations of the U.S. Securities Act for failing to register its 2017 distribution of its Kin tokens.

“Since Kin, a currency is not itself a security, the SEC must show that it was sold in a way that violates the securities laws. The SEC had access to over 50,000 documents and took testimony from nearly 20 witnesses prior to filing its Complaint, yet is unable to make the case that Kik’s token sale violated the securities laws without bending the facts to distort the record. Our Answer shows how the Commission repeatedly attempts to distract from the core issues by levelling irrelevant factual allegations solely to make Kik look bad, distorting the facts or simply making things up. Accordingly, we have taken the unusual step of explaining in our comprehensive Answer why the SEC’s multitude of misrepresentations are incorrect. I encourage everyone who was dismayed by the SEC’s allegations against Kik to read the full Answer and see for themselves how the SEC repeatedly singled-out statements from a body of thousands entirely out of context to drive their false narrative.”

“Our Answer demonstrates how the Commission has repeatedly twisted the facts to make its case, which it would not have done if it had strong evidence. The SEC’s reference to a “hail Mary pass” ignores that a Kik director said exactly the opposite: ‘I think this is a great idea. People call [a cryptocurrency] a hail Mary, but to me, that is a longshot and I really do not think it is a longshot.’ The SEC tries to paint a picture that the Kin project was an act of desperation rather than the bold move that it was to win the game, and one that KaKao, Line, Telegram, and Facebook have all now followed.”

The Answer is a 130-page document that shows the Commission’s repeated twisting of the facts throughout its Complaint and provides evidence of a dramatically different picture of the facts and circumstances surrounding Kik’s sale of Kin in 2017, which they say make it clear that Kik did not violate federal securities laws.

“Despite the distractions caused by the SEC’s Complaint, we are gratified that the Kin ecosystem continues to grow and thrive, and that Kin is touching millions of people across more than 60 applications, in a variety of valuable earn/spend use cases by over 500,000 people per month. Importantly for developers, it is clear from the SEC’s lack of action against the Kin Foundation that the transactions currently taking place within the Kin Ecosystem do not fall under the federal securities laws. We’ve asked for an early trial date and dismissal of the complaint so that we can put this case behind us and get the needed regulatory clarity the industry needs.”

Kik Interactive Inc. connects the world through chat. The company is the maker of Kik, a chat platform popular where people can chat with friends and connect with chat-based services. Founded in 2009, Kik Interactive Inc. is headquartered in Waterloo, Ontario, Canada, and has offices in Tel Aviv and San Francisco. For more information, please visit https://www.kik.com.