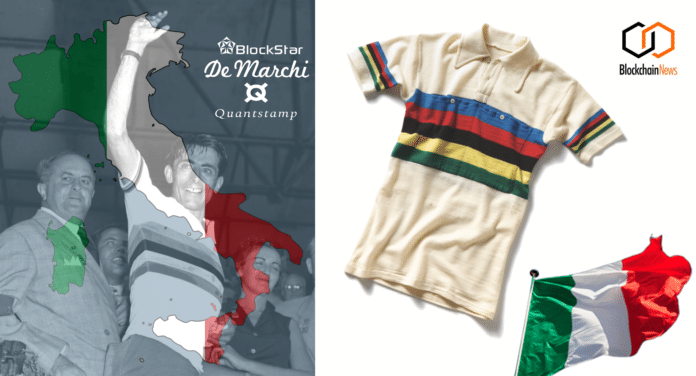 “As we prepare to launch this historic event, we are eager to kick off the next generation of brand-authenticated digital good sales. Both buyers and brands recognize how our blockchain-based platform can be used not only to guarantee the authenticity of physical goods, but also to provide customers with a certified, non-duplicable, digital twin that opens up an endless highway of opportunities in the digital world, such as in gaming, VR, social media and more fields we have not even entered yet.”

The sale of the jersey recently created by the legacy company will be auctioned in September using BlockStar’s blockchain platform which will authenticate the physical jersey while providing the first branded digital apparel twin. The highest bidder will receive the first, and only, physical replica of the 1953 Coppi original jersey as well as the exclusive rights to the digital rendering of the original jersey.

“The De Marchi brand is proud to pay tribute to Italy’s greatest cyclist by harnessing BlockStar’s world-class technology to provide the winner with an authenticated, dual ownership of a true cycling artifact. This auction is a unique opportunity to collect not only the only authorized and one-of-a-kind  physical replica of Fausto Coppi’s jersey but also the digital rights to the piece.”

This digital twin will allow the winner to guarantee the authenticity of both the physical jersey, as well as to give the purchaser the ability to utilize the digital version in an array of digital environments. 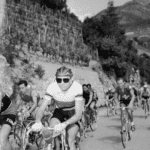 Fausto Coppi, better known as Il Campionissimo, was the most accomplished cyclist of his time. His accolades include being a two-time winner of the Tour de France (1949, 1952) and a five-time winner of the Giro d’Italia (1940, 1947, 1949, 1952, 1953). The original jersey was created by Elda De Marchi to honour Coppi’s Road World Championship win in 1953 before it vanished for 60 years until being rediscovered in 2015. While the original jersey is now housed in Italy’s Museo Ghisallo,  the now 88-year-old Elda De Marchi has sewn a replica of the one-of-a-kind jersey using the same materials, colours, dimensions, and relic look, giving one individual the chance to own a piece of cycling history.

Counterfeit goods, representing approximately 7% of the $1.8 trillion of annual global trade, have plagued countless industries, with art and rare goods being no exception. A lack of transparency in the provenance of goods has created a major roadblock in consumer confidence and the purchase of high-value, unique goods. Through a partnership with IBM, BlockStar will use its blockchain-based proprietary platform to issue a Digital Authentic Good (DAG) token capable of both verifying the authenticity of the physical product and also storing the unique, certified, digital representation of Coppi’s original jersey. This digital twin of the actual original 1953 jersey will be readable via a digital wallet inside the winner profile page. The solely authorized duplicate will be irreproducible, confirming true ownership of the famous jersey.

The official launch will take place on  September 4 at EuroBike 2019 in Friedrichshafen, Germany, at 5:00 pm CET, where a press news conference with De Marchi CEO, BlockStar CEO, and Fausto Coppi’s son, Fausto Coppi Jr. will kick-off this first of its kind auction. Following, a countdown and ringing of the bell by Fausto Coppi Jr. will symbolize the official start of the online auction which will run for seven 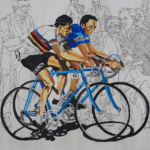 In addition to traditional currency, the auction will also accept several cryptocurrencies such as Bitcoin, Bitcoin Cash, Ethereum, Litecoin, and USD Coin. Blockstar and De Marchi have partnered with Quantstamp, a leading blockchain security firm, to enhance the security of the smart contracts and website underpinning the sale. Quantstamp has secured over a billion dollars of digital asset value through their audits to date and has helped a broad range of enterprise companies deploy blockchain solutions.

De Marchi is a premium Italian sportswear manufacturer and one of the oldest known cycling clothing brands, with more than 75 years of experience. No other brand has contributed equally to the evolution of cycling clothing, introducing many of the innovations that changed it forever, like the tubular weaving, the zipper use instead of buttons, the first elastic chamois for cycling shorts. It is no coincidence that many of the greatest champions such as Fausto Coppi, Gino Bartali, Louison Bobet and Jacques Anquetil have been wearing cycling clothing from De Marchi.

BlockStar bridges the physical and digital worlds with Digital Authentic Goods, next-generation technology that empowers brands through product authentication, deeper consumer engagement, and secure monetization of their brand in the digital frontier.