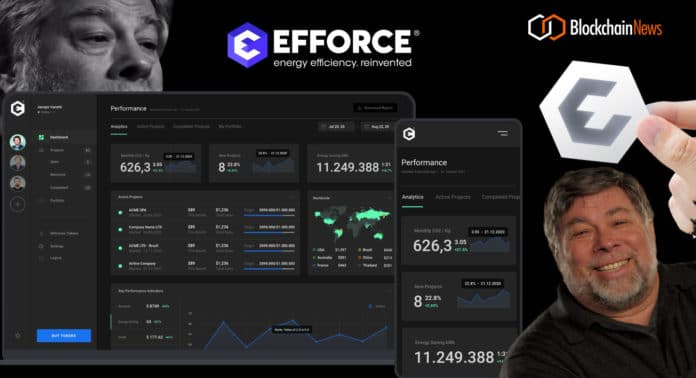 In the coming months, a team of visionaries, including Apple’s co-founder Steve Wozniak, is about to launch EFFORCE – a revolutionary blockchain platform that aims at increasing energy efficiency by allowing everybody to participate in and benefit from worldwide energy efficiency projects.

“In the last 10 years, energy consumption increased exponentially worldwide due to an ever-growing population. This has contributed significantly to climate change and the extreme consequences on our environment. Therefore, improving productivity while reducing energy consumption is the answer. This is energy efficiency. We created EFFORCE, the first decentralized platform that allows you to participate and benefit from worldwide energy efficiency projects. Thanks to blockchain technology, EFFORCE will improve the way we use energy enabling a meaningful change. Our idea is so simple, that with the right push, it will make a tangible impact on everyone. This push can’t be a single person’s battle. It needs to come from all of us together to compound its effect in such a way it becomes a reality over our life span. Can we lower Energy Consumption without changing our habits? This is our mission. This is Efforce.”

It’s hard to fathom that we live in a world where humanity itself is the biggest threat to our planet. The world’s limited resources cannot even begin to match the pace of the infinite wants of our ever-growing population.

This is the basic economic problem. Far from being theoretical, it has contributed significantly to climate change and is having extreme consequences on our environment.

“At EFFORCE we believe in a world where sustainability does not come at the cost of profits and wide-scale upheaval. We believe in a world where sustainability actually generates outsized benefits without consumers even needing to change their habits.
This is energy efficiency. But in order to reach the Efficient World Scenario as defined by the IEA we need to increase investments. It might sound impossible, but at EFFORCE we are devoted to making this vision a reality. We’re driven by the goal of building systems and technologies which operate as efficiently as possible,” said Jacopo Visetti, co-founder and project lead.

The return on energy efficiency investment for industrial companies typically ranges between 20-70%.

For example, a 16-year-old shoe factory in London is fitted with halogen light bulbs.
Last year alone, these light bulbs used 2.000 MWh of energy running up a £100,000 bill.
By simply replacing these bulbs with LED lights, 600MWh of energy was saved – and the factory’s energy bill was more than halved.

Of course, the improvements come at a price – a cost which is often low on the priority list of a growing business. Energy Service Companies (“ESCOs”) worldwide represent the vehicle which helps individuals locate inefficiencies and most importantly finance the restructuring needed to generate the overall saving. ESCOs invest directly in exchange for a percentage of the savings generated. ESCO investors benefit through sizeable returns on their investment, companies benefit through the additional energy-saving cost which can be redeployed with their businesses and most importantly, the planet benefits from reduced energy consumption.

Today the energy efficiency market has reached a staggering of $241 billion with 10% growth per annum. But in order to achieve the Efficient World Scenario, we need to double the size of investments to $580 billion by 2025.

EFFORCE was created to solve this problem. Co-founded by Steve Wozniak (“Woz”) and Jacopo Visetti, EFFORCE has brought some of the best engineering minds together. Jacopo, a 35-year-old entrepreneur, has spent the last decade of his life pioneering investments in energy efficiency.

His vision, which started around a rustic kitchen table in an apartment on the outskirts of Milan, led him to build AitherCO2. One of the world’s largest companies in the sector, AitherCO2 is a leading provider of financial services to the world’s environmental and energy markets offering consultancy and trading solutions that supports companies subject to regulatory obligations as well as those operating voluntarily in the environmental markets to deal with administration, deadlines, registries, regulation changes and balance sheet optimization of allocated units. They provide market access for industrial and aviation clients both on the regulated exchanges as well as through their vast counterparty network.

Since Apple was founded, Woz has had the vision of building small and efficient machines that could become part of anyone’s house.

The same spirit of gathering people together to make the difference and to improve everyone’s daily life is at the core of the whole EFFORCE venture. A team led by Jacopo’s energy expertise and Woz’s disruptive and unconstrained thinking, which came up with a solution to increase investment in the energy efficiency market.

The EFFORCE platform will allow anybody in the world to finance energy efficiency projects at any investment size, at the click of a button – and crucially without the need for intermediaries.

This was not possible until now. As a result of this investment, companies listed on EFFORCE receive the energy efficiency improvement actions at no cost.
Their energy meters, which will be connected to the Blockchain, send real-time data on the savings generated.

The Blockchain will certify the savings recorded in an immutable way and automatically distribute the profits generated to investors and energy-saving becomes a tangible asset that can be traded on the market or used to offset bills.