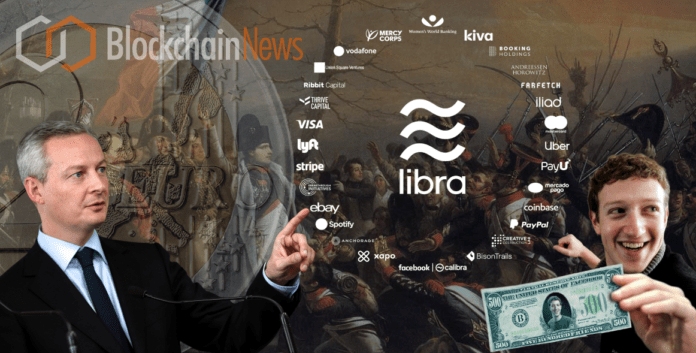 French economic minister Bruno Le Maire has declared that his government intends to block the development of Facebook’s Libra cryptocurrency in Europe because of systematic threats it poses to financial security and stability.

French newspaper, Le Figaro revealed Le Maire’s remarks at an OECD conference dedicated to cryptocurrencies, Le Maire said the risks are simply too great and trust in Facebook too low.

“I want to say it with great clarity: in these circumstances, we can not allow the development of libra on European soil,” said the minister at the opening of an OECD conference on the challenges of cryptocurrencies.

“The monetary sovereignty of countries is at stake from possible privatisation of money … by a sole actor with more than 2 billion users on the planet,” he said.

Le Maire has been outspoken about his opposition to Libra in recent months. But while it appears he now wants to get all of Europe on board, it wasn’t clear from his remarks which organizational body or mechanism would create a continent-wide ban.

Still, his statement was a sign of the immense distrust still haunting the social media giant.

Herbert Sim, Head of Business Development, at the market leader in ISO-Certified FX and Crypto Solutions Broctagon Fintech Group, told Blockchain News that Libra represents the first stable digital currency which could be a feasible alternative for the mass market.

“It’s no wonder France feels threatened. And they’re not the only ones responding in the same way, countries like the US and India seem to be actively working against crypto.”

“At the same time, others are throwing themselves into the race, with China advocating for Bitcoin and creating its own digital currency. It’s clear that some are recognising the opportunity cost of dismissing the crypto market.”

“It’s interesting that Bitcoin prices haven’t really shifted since the announcement. It seems prices are becoming less dependent on the actions of central authorities. This is a positive sign for the crypto markets. As we look set for a global recession, we could see the previous “Wild West” of the investment world become a safe haven.”

Besides Facebook, backers of Libra include the payment companies Visa, MasterCard and PayPal, as well as the ride-hailing apps Lyft and Uber.