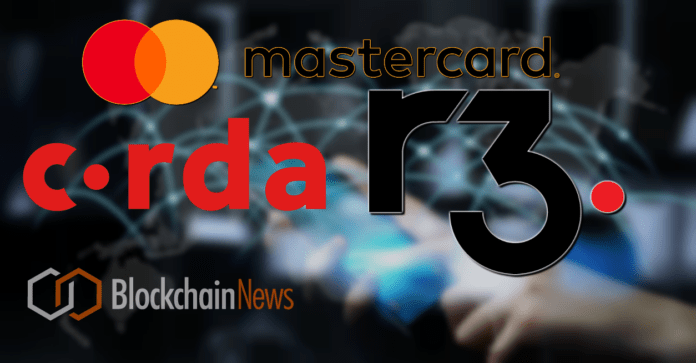 Mastercard and R3, a leading enterprise blockchain software provider, have today announced a strategic partnership to develop and pilot a new blockchain-enabled cross-border payments solution that will initially focus on connecting global faster payments infrastructures, schemes and banks supported by a clearing and settlement network operated by Mastercard.

The fear cycle around blockchain is dissipating, according to Sheila Warren, Head of the Blockchain at the World Economic Forum.

“It’s exciting to see tech giants publicly owning their explorations of blockchain technology. This kind of validation should help to cement the idea that this technology is here to stay. Companies not contemplating their potential should spend some cycles familiarizing themselves with it.”

“At the same time, the types of use cases are primarily in the payment arena, reflecting the technology’s relative maturity in that space. We expect to see more public declarations going forward as the fear around this technology dissipates and we continue to move along the hype cycle.”

“Developing a new and better cross-border B2B payments solution by improving worldwide connectivity in the account-to-account space is central to Mastercard’s ambition. Our goal is to deliver global payment infrastructure choice and connectivity as demonstrated through our recent strategic acquisitions and partnerships, including our relationship with R3. It confirms our commitment to innovation, both home-grown and through partnerships and acquisitions, to support advances and innovation in the increasingly complex global payment infrastructure space.”

The partnership is the latest step in Mastercard’s multi-rail strategy, providing customers with an unrivalled choice in how they move money. By combining R3’s expertise in blockchain with Mastercard’s existing payment systems assets, brand and distribution, the partnership will provide increasingly innovative, value-add services for customers, addressing factors such as high processing overheads, liquidity management and the existing lack of standardization and processes between banks and domestic clearing systems.

“We are excited to partner with Mastercard to help shape the future of the digital payments ecosystem. All institutions – large or small – rely on the ability to send and receive payments, but all too often the technology they rely upon is cumbersome and expensive. Cross-border payments can be a particular pain point. Corda was designed specifically for enterprise use cases such as this, and we look forward to supporting Mastercard in bringing blockchain-enabled payments businesses across the globe.”

“Many companies are experimenting with the more cutting-edge implementations of blockchain technology, creating standalone internal units and investing in promising startups dealing with cryptoassets. These investments are driven by a need to protect against disruptive change, innovate their models and tackle a sector of high growth at a time of stagnating interest rates.”

“Payments are a killer app for blockchain, unlike any other due to their mass appeal – a use-case that is especially relevant for the mainstream adoption of digital currencies as a means of payment. In an age of fast information & instant feedback, where digital and physical augment each other, a universally trusted, verifiable and privacy-conscious means of value transmission will play a pivotal role. This follows the same cycle of continuous technology evolution we have seen in the early ages of the internet. In the same way, email or the browser were killer apps of the early internet age, relying on protocols and foundations of years prior. Those, in turn, led to the next wave of killer apps – search engines, social networks, mobile-centric apps and more. All of those had implications beyond just technology, tackling specific segments – be it productivity, communication or human relations. This time is money itself.”

“We have seen a number of major financial corporations enter the blockchain space in a similar fashion, and MasterCard follows suit. The difficulty here has been distinguishing institutional recognition of this valuable technology from corporate appropriation.”

“On one hand, we can’t survive as new financial systems without meaningful recognition from and conversation with legacy systems, such as MasterCard and other centralized goliaths. On the other hand, these technologies—especially the public blockchains—pose a very real threat to the business models of a number of these companies, and in order to quell their disruption, giants like MasterCard want to absorb crypto projects on their own terms.”

“Ultimately, if blockchains scale to their full extent, there will be little need for the kind of private DLTs JPMorgan, Facebook, and now MasterCard propose. The true killer Dapp will make obsolete these private networks; it will be faster and cheaper to use while returning financial economy to its users; that is the promise of Bitcoin that so many new chains are trying to fulfill. So one can see that their motivation in entering the space is, at least partially, guided by their need to street the conversation, to dictate the way in which blockchain technology enters the world. For now, though, blockchain must support and participate in these projects.”

“While it’s not clear yet whether the proposed initiatives will go beyond proof-of-concept, the news that Mastercard is to develop a blockchain-based cross-border payments platform is a welcome move.”

“Tech giants such as Mastercard play an influential role in encouraging the acceptance of cutting-edge technologies and this news is symbolic of Mastercard’s willingness to challenge the status quo and seek solutions to improve current payment systems.”

“Change is on the horizon and, as technology continues to evolve, we are witnessing cryptographic breakthroughs including zero-knowledge proofs, multiparty computation, and scalability solutions — all of which have the potential to shake up the financial industry as we know it.”

R3 is an enterprise blockchain software firm working with a global ecosystem of more than 300 participants across multiple industries from both the private and public sectors to develop on Corda, its open-source blockchain platform, and Corda Enterprise, a commercial version of Corda for enterprise usage.

R3’s global team of over 200 professionals in 13 countries is supported by over 2,000 technology, financial, and legal experts drawn from its vibrant ecosystem. The Corda platform is already being used in industries from financial services to healthcare, shipping, insurance and more. It records, manages and executes institutions’ financial agreements in perfect synchrony with their peers, creating a world of frictionless commerce.

Mastercard is a technology company in the global payments industry that connects consumers, financial institutions, merchants, governments and businesses in more than 210 countries and territories.