Pi Network, a rapidly rising star in the blockchain world is close to reaching a halving – to take place when half a million users are registered (currently at 450,000+).

The project’s mission is bold – to build the world’s most inclusive peer-to-peer marketplace, fueled by Pi, the world’s most widely used cryptocurrency. And create a smart contract protocol that is secured and operated by everyday people, not a concentration of whale miners like Bitcoin.

The Pi team have worked hard to build a platform that addresses many of the current problems with proof of work mining and cryptocurrency (energy wastage, centralization issues with cryptocurrency ownership and mining etc.) and the Pi Core Team has introduced a consensus algorithm that would also be extremely user-friendly and ideally enable mining on personal computers and mobile phones.

The core team includes Pi Head of Technology, Dr. Nicolas Kokkalis, a Stanford Ph.D. and instructor of Stanford’s first decentralized applications class, Dr. Chengdiao Fan, Head of Product is a Stanford Ph.D. in Computational Anthropology and Pi Head of Community Vincent McPhillip out of Yale and Stanford who is a co-Founder of the Stanford Blockchain Collective.

Pi is based on the Stellar Consensus Protocol (SCP) and an algorithm called Federated Byzantine Agreement (FBA).

See video for an explanation on how SCP and FBA work.

There are four roles Pi users can play, as Pi miners. Namely:

The Pi Model seeks to strike a balance between creating a sense of scarcity for Pi, while still ensuring that a large amount does not accumulate into a very small number of hands. They want to make sure our users earn more Pi as they make contributions to the network.

Pi’s goal is to build an economic model that is sophisticated enough to achieve and balance these priorities while remaining intuitive enough for people to use.

The Token Utility is very interesting – as it’s about pooling and monetizing the members’ time online: 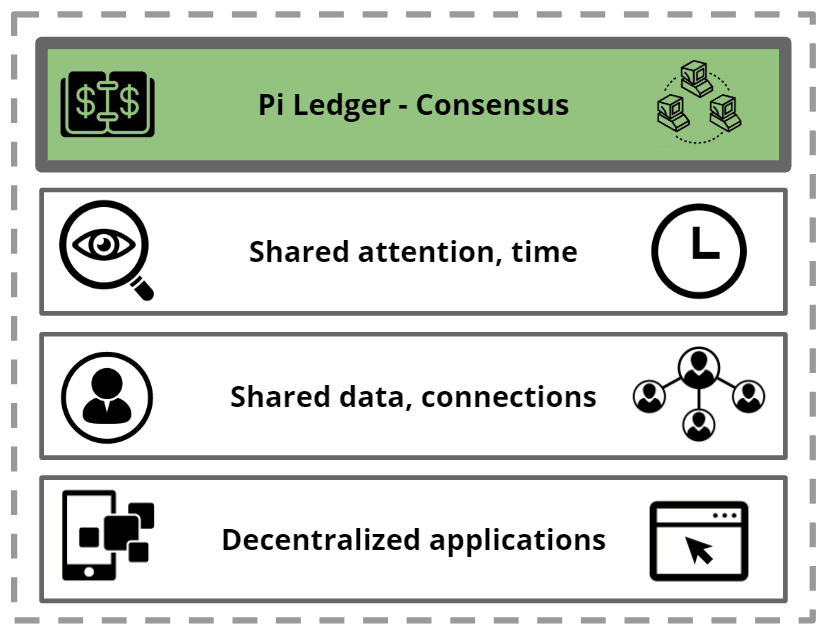 Until the network hits a critical mass of five million members, Pi will operate under a provisional governance model. This model will most closely resemble “off-chain” governance models currently employed by protocols like Bitcoin and Ethereum, with Pi’s Core Team playing an important role in guiding the development of the protocol.

Upon hitting five million members, a provisional committee will be formed based on previous contributions to the Pi Network. This committee will be responsible for soliciting and proposing suggestions from and to the wider community. It will also organize a series of on- and offline conversations where Pi’s members will be able to weigh on Pi’s long-term constitution.

The project is invite-only, feel free to use expathos in order to join the project and download the mobile app. Or click here.