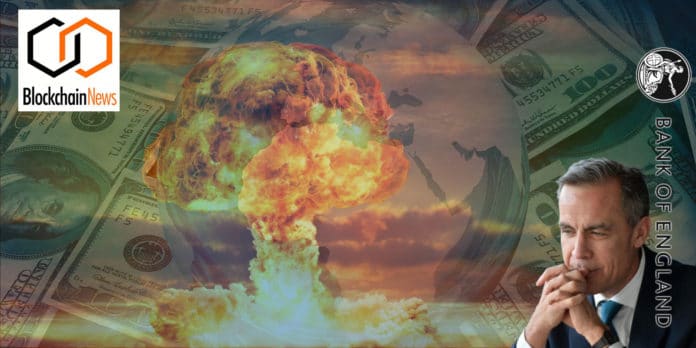 The Bank of England (BoE) has made the mainstream media reporting landscape once again about adopting cryptocurrency. Or what they prefer to call Central Bank Digital Currency (CBDC) – with the only significant difference being that CBDC's are issued by the State and have legal tender status declared by the government.

“This move comes as no surprise, China has clearly lit a fire under these other nations, who are starting to recognise the inherent advantages of crypto. Countries that can correctly implement a CBDC will stand to benefit as they will have a currency that is totally borderless, efficient and immutable. The irony of having a ‘centralised’ cryptocurrency seems to be lost on these state banks. The founding principal of crypto was decentralisation, so banks need to be careful that they don’t lose sight of the advantages that decentralisation can provide, otherwise there will be no real benefit of using the new currencies over fiat. Hopefully, the CBDC of the future will be able to walk the line between state-issued currencies and the advantages of crypto.”

This fresh mainstream media storm was ignited by the news that the UK is but one of six countries in The Bank of International Settlements (BIS) in a group to share intelligence on research and deeper investigation into the potential cases for national CBDC's.

But this is not the first time that the BoE has shown interest.

Deputy Governor for Monetary Policy of the Bank of England, Ben Broadbent was already touting it in early 2016 in a speech at the London School of Economics in London. As well as in a staff working paper in 2018.

And as reported at Blockchain News, due to the murder of UK Labour MP Jo Cox, Bank of England Governor Mark Carney cancelled his speech called “Enabling the FinTech transformation: Revolution, Restoration, or Reformation? ”  that was to have been given at the Lord Mayor’s Banquet for Bankers and Merchants of the City of London at the Mansion House, London on June 16, 2016.

Carney also addressed The Financial Stability Board (FSB) in 2016 on CBDCs:

The ledger, once stone, wood, or paper – and always centralised – is now digital and may become distributed. Fintech has the potential to deliver more resilient financial infrastructure, more effective trade and settlement, and new ways to encode, share and analyse data.”

“For the financial sector, these could offer shorter, speedier transaction chains; greater capital efficiency; and stronger operational resilience. For consumers, they could mean more choice; better-targeted services; and keener pricing. For everyone, fintech may deliver a more inclusive financial system, domestically and globally; with people better connected, more informed and increasingly empowered.”

In another Blockchain News article in 2017 Canadian Carney, Speaking at the Deutsche Bundesbank G20 conference on “Digitising finance, financial inclusion and financial literacy”,  said that the BoE is looking into the policy and technical issues posed by Central Bank Digital Currencies (CBDC) and is already developing Blockchain proofs-of-concept.

“Emerging technologies, such as distributed ledger, could in future offer significant gains in the accuracy, efficiency and security of processes across payments, clearing and settlement as well as better regulatory compliance. In the process, tens of billions of dollars of capital may be saved and resilience could be significantly improved,” stated Carney.

And in 2019, Carney raised a storm with his call for a global monetary system to replace the US dollar. Adding that a “Synthetic Hegemonic Currency” (SHC) governed by the public sector and backed by a number of central bank digital currencies could replace the US dollar as the global reserve currency and that this would be preferable to the alternatives, such as the Chinese Yuan/Renminbi becoming the global reserve.

He unleashed the controversy at the Economic Policy Symposium in Jackson Hole, Wyoming, USA by stating that while the U.S. dollar is facing pressure due to globalization and trade disputes – and the impact on national economies is stronger today than it was in the past, there needs to be a new global monetary system to replace the US dollar.

The U.S. economy is about 25 percent of the global economy in terms of total dollars but is significantly less if you adjust for price differences across countries. The American dollar is even smaller relative to world trade- but, the dollar is the dominant currency for trade invoicing and cross-border payments across the world. More than 50 percent of all international trade is denominated in dollars, while 30 percent is denominated in euro. The remainder is a blend of other currencies – the British pound, Japanese yen, and Chinese yuan.

“Even a passing acquaintance with monetary history suggests that this centre won’t hold. We need to recognise the short, medium and long term challenges this system creates for the institutional frameworks and conduct of monetary policy across the world. Given the experience of the past five years, I will close by adding urgency to Ben Bernanke’s challenge. Let’s end the malign neglect of the IMFS and build a system worthy of the diverse, multipolar global economy that is emerging.”

The Canadian said that the best solution in terms of stability would likely be a diversified multi-polar financial system, something that could be provided by technology. He stated that the dollar’s destabilizing reserve status role in the world economy has to end, and explained that one option was for central banks to join together to create their own replacement reserve currency, one tied to an SHC.

Carney unsurprisingly talked about Facebook’s Libracoin as he broke ranks with other central bankers to say he was keeping ‘an open mind’ about Facebook’s new currency Libra – the most high-profile proposed digital currency to date according to Carney. But, he added that it faced a host of fundamental issues that have yet to be addressed. Carney is currently under fire by the UK media for secretly meeting Mark Zuckerberg at Facebook in California, on April 16, two months before Libra was unveiled.

“As a consequence, it is an open question whether such a new Synthetic Hegemonic Currency (SHC) would be best provided by the public sector, perhaps through a network of central bank digital currencies,” the head of the BoE added.

Carney is not alone – chief economic adviser at Allianz Mohamed El Erian, IMF Managing Director Christine Lagarde, Putin and the Kremlin, and the Chinese central bank have all suggested that a new currency is coming to replace the dollar.